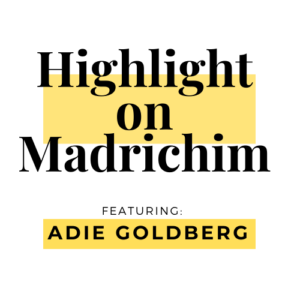 “When you’re a therapist and slightly neurotic,” smiled Adie Goldberg, “you walk down a lot of self-help paths. Nothing has been more transformative to my personal life journey than my study of Mussar.”

A Psychiatric Social Worker by trade, Adie was working as a Jewish Educator at a Conservative Synagogue in Spokane, Washington, when she discovered Mussar. On a search for an ethical framework for teaching children, she found “Be the Mensch of the Jungle,” which featured giraffes who taught the importance of sticking your neck out for someone in need.

This lighthearted discovery led to a deeper dive into Mussar study for Adie. Not long afterward, she moved to Ashland, Oregon.

“When I moved to Ashland,” Adie said, “well, the rest is history. I met Rabbi Joshua [Boettiger] and his passion about Mussar! He was trying to build a Mussar infused community…and I began my formal Mussar journey. We used CCM materials, and Rabbi Joshua would add his west coast spin.” A few years into her studies, Adie joined a Madrichim Training Program with Mindy Shapiro and Nancy Axelrod.

“What I found very specific to Mussar was a Jewish language for much of the mental health teachings that I was already doing. I lovingly call it the Twelve Step Program for Jews Who Want To Heal The World!” Adie laughed. “But really a lot of the language is consistent with the cognitive behavioral therapy precepts and mindfulness precepts that were already a part of my clinical practice. I was really lucky to be able to frame it in a Jewish context–with a lineage, grounded in my tradition, and language that I could speak in a spiritual way. It was a really beautiful melding and blending of two worlds.”

Adie’s work as a Psychiatric Social Worker, along with a history of work in the Peace Corps, has placed her in service to traumatized individuals from all around the world. She described an aspect of her Mussar-informed therapeutic approach as deep listening to the story of another.

“Africa has an oral tradition of storytelling, so a lot of the work was sitting and holding witness to the other,” she said. “My work in Rwanda was with the trauma counselors. So I held space for them; those who were holding so many others…for me it’s about asking: what do you need from me. Most often what comes back to me is: just listen.”

Adie described, “Sitting in love and holding space to be present for another [with the hope that] somehow that gets in through a crack to the Nefesh to find their Neshamah.” She recalled being with people who had horrific experiences, and yet, “their divinity shines through despite the trauma. That’s what keeps me going back.”

For individuals who haven’t experienced a terrible trauma history but still carry painful memories, Adie helps them find ways to become more balanced, or semipermeable in their Nefesh, by sorting through real and perceived threats. “In therapy,” she said, “it’s small incremental steps. Small corrective experiences that allow an individual to feel less self-absorbed, and more open to what is in front of them.”

Mussar has not only transformed Adie’s work, “It has profoundly impacted my relationship with family members, with friends, with colleagues, with clients,” she said. “My daughters–who are all now adult women–have commented that they feel that they can approach me around difficult topics around which they couldn’t before because they were worried I’d get defensive or tell them what to do. They recognize a dramatic shift in the way we interact. The family joke is that when something happens and I say something, they say: hashtag Mussar!”

Perhaps the Mensch of the Jungle stories worked, or perhaps Adie’s approach to mothering with Mussar drew upon a latent quality already in her children.

“All three of my daughters are very involved in social justice in their own way,” Adie said. “One daughter is an assistant attorney general, another daughter is working on criminal justice reform, another is an educator. I don’t know where else you find an ethical, thoughtful, justice driven, spiritual journey that would meet my family’s needs like Mussar has. I’m filled with tremendous gratitude everyday.”

Adie has continued practicing and teaching Mussar in the lineage of CCM in part because of the emphasis on community, but also due to Rabbi Stone’s unique approach. “I’m particularly called to hear Rabbi Stone’s words profoundly: take Mussar into the world. That’s unique; to find a program that says you have to work on yourself, but that’s not enough. You have to take it to the next step. I have a lot of gratitude to Rabbi Stone for holding our feet to the proverbial fire. To not become so absorbed with our own growth that we forget that there are multitudes of others out there that need our attention.”

How to bring Mussar to the world?

“We’re going to invent it. One of the gifts of Mussar is that when we look at our [Jewish] legacy, it has offered advice and guidance throughout the generations. And so, I trust and believe that it will offer guidance with whatever the next step is.”

Adie Goldberg currently teaches a third-year Va’ad in Spokane, Washington, and co-teaches a large Va’ad of twenty one students from Ashland and Spokane with Rabbi Joshua Boettiger. 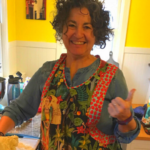 Adie Goldberg is a mother of 3, grandmother, daughter, sister, friend, social worker, teacher, world traveler, volunteer and Jew. A lifelong learner, she completed her PhD in her sixties. The deep dive into Mussar at Temple Emek Shalom has turned out to be the most transformative learning of her adult life. Mussar has offered her a Jewish language to understand all her relationships and a framework that guides her in the simplest of encounters.