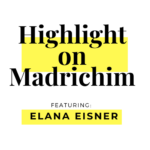 Elana Eisner was raised in a conservative Jewish household and as a teenager discovered a deep interest in Jewish and religious studies. She grew up in a suburb of Chicago where Rabbi Philip Lipis, who served at her local synagogue, kindled her awareness of the intellectual depth of Judaism–an awareness she would continue to cultivate throughout her life.

At the University of Iowa in 1964, Elana majored in Comparative Religion and Education. This study broadened her understanding of other traditions and deepened her own devotion to Judaism. Though she already considered herself a religious person, her spiritual journey would begin later in her life aided by decisions to become more involved in Jewish rituals–in particular rituals around death and dying, to keep kosher, and to study mussar.

The decision to keep kosher came in 1966-67, when she lived in Israel. Elana recalled, “The realization was that if I didn’t do this when I got married it would be lost in my family. My parents didn’t keep kosher I didn’t think anyone would take it on if I didn’t. It was only later that I realized how meaningful it would become.”

Elana described kosher as “a ritual of consciousness which fits in with mussar. A choice is made to be reflective about taking life; because kosher meat is slaughtered in a prescribed way, my assumption is that the whole process is about the consciousness of all of life–animal and human.”

The conscious practice of keeping kosher attends to both interruptive and instantiative mitzvot as described by Rabbi Ira Stone. Elana explained, “The interruptive is to say a blessing over the food, or to interrupt the meal planning to change from meat to milk. The instantiative is the whole ongoing decision to keep kosher as an expression of respect for life. The theme of life runs everywhere through Judaism.”

In a Midrash about the Biblical command to keep kosher, “It is said that when God said thou shalt not kill, He meant animals too. Jews were meant to be vegetarian. But when Moses was talking with God up on Mt. Sinai, he said you know this is not going to fly with the people. They’re not going to buy this one! We have to come up with a compromise,” Elana smiled, “So God said, okay. If you’re going to eat meat, here are the rules: it has to be slaughtered ethically and you can only eat these types of animals. He made rules to ensure that we knew what we were doing when we chose to kill to eat. Animals have consciousness, and this requires deep awareness and the reminder to pay attention because your food comes with sacrifice.” Kosher practices are intended to invoke greater awareness and presence; for Elana, this was a way to be more awake in her daily life.

Elana’s decision to learn Jewish burial customs would prove to be another awakening.

“The Jewish ritual around caring for a dead body is about ultimate respect for the container of the soul,” she said. “That touched me deeply when I learned about it and became a volunteer. The first time I was in a group of women preparing a body for a burial, I had my first truly transcendent experience. It was quite stunning. I thought now I know there’s something out there. It all got pulled together.”

Elana continued, “Caring for the dead is considered one of the highest mitzvot because “it’s the one act that we can do where we’ll never get repaid. The dead can not thank or repay us so it’s a totally selfless act–and so beautiful. Psychologically, I think Jewish burial customs, based in Torah, are very sound in terms of healing. The first mention of burial is when Abraham buys a plot of land to bury his wife Sarah.”

Observance of Jewish burial customs and rituals are intended to safeguard the process for the soul departing on their way and for those left behind to grieve.

“We believe in the quick burial of a body. The mourners participate in the process which is psychologically very important,” Elana said. “The shoveling of dirt is an experience in the body. The sound of the dirt hitting the wood casket is a sound you never forget, and the body is impacted by that. The finality is talked about and experienced in the body. [The recognition of] that finality through these acts help speed the soul on its way. After that, the typical pieces of grief–like denial–still come up. We still need time to absorb the reality, but the process has begun when we begin this deed.”

These experiences shaped Elana’s appreciation for the depths and importance of ritual for psychological wellbeing. Her work as a therapist continued to thrive and in 2000 she decided to engage in formal training to become an analyst. She looked for ways to engage more deeply with her clients and turned toward the Jung Institute in Los Angeles. There, unlike in the Freudian schools of study, she found “they were talking about God as a part of who we are as human beings.” In the light of this approach, she was able to more deeply understand, integrate, and language the experiences of grace she’d had with clients.

While working on the psychological aspects of Jewish ritual for a graduate paper, Elana decided to reach out to her local rabbi with a question about mikvah, the ritual of immersion. She contacted Rabbi Rachel Bovitz at Temple Aliyah in Woodland Hills and received both the finishing touches on her paper and her first steps into mussar.

“I’ve always expressed a deep sense of gratitude to Rabbi Bovitz,” Elana beamed. “She brought a depth, a quiet understanding, a passion to the work that made me feel like–ah! It was heaven. She was open to my input about the psychological pieces about mussar that I thought were useful and that gave me a chance to pull together the psychological and ritualistic pieces of mussar–something I think Rabbi Stone is doing a great job at.”

Though Elana completed the full course of study with the Mussar Institute, it was the combination of Rabbi Stone’s teaching and the depth of mussar study materials provided by CCM that convinced her to stay. Perhaps even more, mussar invigorated her kosher rituals in a new way. She remembered, “Once you start practicing mussar, it just brings to life the things we do rote in a new way. To stop and consider all that goes into us enjoying a cup of coffee. It adds such depth to simple things.”

Now as a Madrichah, she is “very impressed with people’s willingness to be open, share, and take emotional risks. In my first Seeds class I thought–wow–people are so engaged!”

The structure of CCM provides an opportunity for students to work closely with a va’ad and with a chevruta. Reflecting on that dynamic Elana said, “Vulnerability in a va’ad allows us all to be human, to admit our frailty and imperfections and that we’re humans struggling to do better. This is very binding and is hard for all of us–and I find this very intimate. We’re struggling together, and in a va’ad it’s a chance to be safe in that struggle. Chevruta is another layer of the va’ad. That one person becomes the one who hears it all and helps you move through whatever situation you’re dealing with in a mussar way.”

In her first class, Elana, “asked everyone to write about how they see their soul’s purpose, or the essence of themselves. The reason I asked them to do that so much earlier in the curriculum, is because as these students go on to further study they’ll be able to look back and see where they were at the beginning. It changes over time. That initial statement of their soul’s purpose evolves over time, study, practice, va’ad, chevruta, and all those things come together to witness the evolution of a soul.”

And she speaks from experience, “The evolution of my own statements showed me that. One of my early Ner Tamid statements, or soul statement, was Lead with my heart with deliberation and compassion. Now it’s You lead my heart. It’s quite lovely to see other people’s shift in themselves through the statement they might make now and in ten years. Mussar is a big part of that.”

Elana will teach a first year class through CCM in the Fall. For more information email us at admin@contemporarymussar.org.