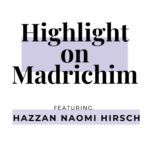 Hazzan Naomi Hirsch defines a Mussarnik as: “Someone who is committed to improving their life and the life of others. The process entails getting to know oneself in a profound way, including facing challenging truths.This knowing leads to being able to take care of one’s own needs in a way that they can be available to the others they encounter. A Mussarnik is awake. Someone who is always aspiring and striving.”

“After the accident, I was reflecting on it with my sister. I felt so horrible for this other driver, a young man.” It turns out that the brakes had failed on his car, leaving him helpless as his car barreled into Hirsch’s. “The other driver had to drive with the knowledge he was about to have a collision. My heart really went out to him as I wondered what that would feel like and how scary it would be,” Hazzan Hirsch recalled. “My sister said, ‘You could be an advertisement for Mussar! I would have been so angry.’ I replied, “What’s the point of that? How could being angry help?” Bearing the burden of another, even in circumstances such as this, is a powerful testament to the effects of Mussar in Hirsch’s life.

Hazzan Hirsch draws from a well of deep Jewish practice and spirituality. She grew up in a Conservative home, with weekly Erev Shabbat festive meals, Shabbat morning shul and Hebrew School attendance. At that time, women were not accorded equal rights in the Conservative movement; Naomi had never seen a woman wear a tallit. But she remembers that as early as age six, she would pull the flat sheet off of her bed and wear it on her shoulders like a full-size tallit, observing herself in the mirror as she adjusted it.

When she was twelve, her father accepted a job in Paris, France. There, her family continued weekly Shabbat morning synagogue attendance at a Liberal synagogue as well as visiting other synagogues in Paris and in other European cities. Hazzan Hirsch remembered that this experience gave her “a much wider view of different ways of observance.

Her family returned to the USA when she was sixteen and a high school senior. She began to work for her synagogue, as a teacher and B’nei Mitzvah tutor. Since then, teaching has always been a strong thread in her life.

At Brandeis University, she was very active in the Conservative Egalitarian minyan and  it was there that she saw, for the first time, a woman wearing a tallit. This gave Hazzan Hirsch the courage to do the same. For the first time, she wrapped herself in a prayer shawl just as decades earlier she had wrapped her young self in a sheet.

On her next trip to the synagogue where she grew up, while wearing her tallit, Hazzan Hirsch was approached by a woman who thanked her for being a role model for her daughters—one of those daughters who would later become a rabbi. “I love to think I may have been a small influence,” smiled Hazzan Hirsch.

She was introduced to Mussar through a long-time acquaintance, Mindy Shapiro. There were initial challenges for Hazzan Hirsch in her Mussar studies. She was “ten years younger than the other students, and the only person in the class who had never been married and had no children. In comparison to my Va’ad mates, I found it harder to come up with Mussar Moments. Everyone seemed to have a built-in ‘other’ in the form of their spouses, (ex-spouses), in-laws, and children. That’s something I’ve tried to be very alert to in my own teaching. When I give examples, I try to include people who are ‘solos.’”

Recently, as a result of her realization about describing the car accident, Hirsch is extremely attentive to language and its power to help a Mussar practitioner attain and retain a semi-permeable nefesh, and move toward Tikkun. “I find myself focused on my own language and the language of my students and how different words evoke different feelings…language really matters, even when communicating to ourselves.”

“I’ve had a couple students say that things are hard, sometimes referring to situations in their lives; more often speaking about the challenge of developing as a Mussarnik. I think saying something is hard is an expression of the Yetzer haRa. I compare it to what Michelangelo said about creating the David sculpture: ‘I didn’t really do anything. I just chiseled away what wasn’t necessary and this is what remained.’ That is what we need to do when things are hard — begin to chip away; even if we don’t know exactly where we’re going, we need to have the courage to chip away what is unnecessary to our betterment. In doing so, we unseat the Ra and once we’ve begun the task, it’s much easier to keep at it.”

“To apply a Mussar metaphor, the chiseling away often involves identifying where we’re hard (or rigid), and learning to soften (or reach semi-permeability). And, of course, we need to use our chisel carefully, lest we cut away too much and become too soft (porous).”

Clearly, Hazzan Hirsch lives by her own word, always aspiring and striving, finding no static moment in being a Mussarnik. 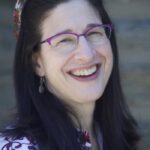