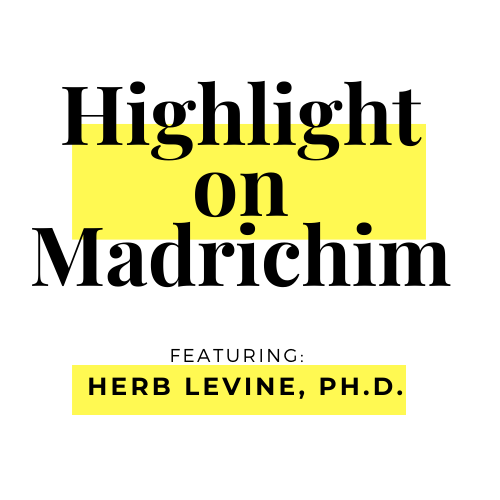 Mussar found its way to Herb Levine in 2011 at a serendipitous time in his professional life.

“I was receiving feedback from my staff that I didn’t know how to be a supervisor,” Herb said. “I had never been trained to be a boss. I was trained as a professor and as a self- starting person I assumed everyone around me would just do what was needed to get the job done.” Yet he was impacted by his staff’s complaints and it kindled in him a curiosity.

Meanwhile, Mindy Shapiro, a fellow member of his synagogue and friend, was about to offer a new class in Mussar. Herb signed up.

“The first thing you study is Order,” said Herb, “I realized that I simply hadn’t made a regular time to check in with each staff member each week to see what was on her plate.”

Through the study of Mussar, students equip themselves with eighteen middot, or soul qualities. In Cheshbon Ha-Nefesh, Mendel Lefin of Satanov describes the first middah (seder, orderliness) in the following way:

All of your actions and possessions should be orderly–each and every one in a set place and at a set time. Let your thoughts always be free to deal with that which lies ahead of you.

Through the activation of the first middah, Herb’s relationships with his staff immediately shifted. “Each person needed to be seen and valued. The way to convey respect was to make time for them, to make sure they saw they were being valued. I simply had never thought my way around that. All this change came from the first middah. That’s why we put Seder first. So many interactions with other people revolve around making time and space for them.”

Herb continued, “The problems I had been experiencing disappeared and I was super encouraged to keep going. As I learned more middot I began applying them in other places in my life. I started to benefit almost immediately in my work relationships and then gradually expanded that to include my family.”

The practice of Mussar begins with others in our immediate vicinity and continues to expand. Herb explained that Mussar is “about the quality of attentiveness one brings to another. It’s about looking for the good in others. It’s about listening for the burden of the other.”

Herb grew up in a conservative Jewish household. His mother came from a Mussar background and his father, on one side, from a Hasidic background, “more fervent and ecstatic,” as Herb recalled. Both of his parents were learned Jews, having studied at The Hebrew Teachers College in Boston. They instructed him in moral precepts with an emphasis on character development and ritual.

His mother constantly quoted aphorisms from Pirkei Avot. She chose passages that kindled Herb’s intellect and encouraged him to stand up for himself in learning. “She used to say the bashful person does not learn, and, if I am not for myself, who will be for me?” Herb recalled, “Later she’d say if you’re only for yourself, what are you? But that came later. In my earlier childhood it was just about developing my ego.”

Behind the scenes at CCM, many madrichim (teachers) are exploring when and how to bring Mussar into the lives of younger people; new curriculum is being explored to expand the reach of Mussar to children, teenagers, parents, activists, and anyone aching for a better world.

Pondering on these ideas, Herb said, “First you have to develop a strong ego before you can learn to make room for the other. First you have to learn to love yourself before you love your neighbor. If you don’t love yourself, you’re going to be desperately seeking attention for an emptiness in yourself. So we–as a program–are exploring these questions. I was in a va’ad once with someone in his twenties who hadn’t made enough mistakes in his life to be able to look at himself critically. There may be appropriate Mussar for each stage of life.”

Perhaps mistakes made in life provide the openings through which the soul flows nearer. “You have to be old enough to be able to look back,” Herb said, “The Hebrew word central to Judaism is teshuvah.”

Herb didn’t have a chance to meet his Lithuanian grandfather who died before he was born. However, Herb discovered much later in life that his grandfather had gone to a Mussar yeshiva in Lithuania. In a deep hearted attempt to contact his mussarnik roots, Herb studied the teachings of that yeshiva. Perhaps some of those deep tendrils reach through him even today.

“Teshuvah means turning,” continued Herb, “It means answer; it means returning.” With that thought, Herb began to quietly sing, “Return to the Home of Your Soul.”

Mussar is for many of us, a way to do just that; to return to the home in the soul. For Herb, Mussar provided this much needed return, but through the teachings of Rabbi Ira Stone, much more was provided.

“I found through Rabbi Stone’s teaching a workable theology and cosmology,” said Herb, “His reconstruction of terms from classic rabbinic theology has been of great significance to me in being able to forge an authentic Jewish path.”

Foundational to Mussar as taught by CCM, is the practice of harnessing our inclinations or impulses for the good in service to the other. Yetzer is a word drawn from tradition to describe the inherent inclinations or impulses that all people experience. Kibbush is the practice of directing the yetzer away from self absorption and toward the needs of those around us. After the skillful use of kibbush is acquired, the next step is tikkun.

“The kibbush work is about correcting one’s behavior, restraining one’s tendencies toward self-absorption. The tikkun work is about forging a soul connection with others,” Herb explained. “In addition, Rabbi Stone and Dr. Trey’s embrace of the tikkun work and teaching of Tomer Devorah is the place within our curriculum that I feel most at home. I feel it has the greatest power and potential for transforming our lives toward goodness at all times.”

Many are drawn to CCM by the magnetism of Rabbi Stone’s teaching, the quality of his livingness, and the illumination he brings to the spiritual path of Judaism.

Perhaps the return to the soul can also reveal a new way forward together.

“Our public life is so embattled, there’s very little listening across differences. Every once in a while we have a crisis that wakes us up to the need to do that. But Mussar has been waking us up to do that all along. That’s why the Jewish people got Torah,” continued Herb. “Jewishness is so central to who I am and Rabbi Stone and CCM’s vision of what Jewishness is, is what I carry as my mission in the world. Through Mussar, I came into a greater sense of who I am and why I’m here.”

Click here for a recording of “Return to the Home of Your Soul.”