Out of Mitzrayim: Toward the Joy of Responsibility 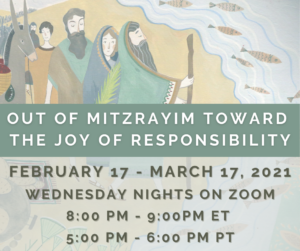 Out of Mitzrayim: Toward the Joy of Responsibility

By Herb Levine, Sec., CCM Board of Directors, Board Liaison to CCM’s Rabbinic Advisory Council

When we think of our ourselves as members of households, there’s no question that for most of us the Passover Seder is the high point of the Jewish year. Every year, it’s important to each Jewish household hosting a Seder that it be a success. Last year, the first of the COVID-years, we were given a reprieve from cooking for our guests and cleaning up when they left. Instead, we convened, many of us for the first time, on Zoom and conducted our Seders under new circumstances, with the threat of plague hanging over us, much as the first Israelites to celebrate Passover are described in the Bible.

This year, it appears, we will once again be gathering our near and dear not at one table, but at many, each with a screen connecting us one to another, but, this time, with the imminent possibility of deliverance from that same plague through the wonder of life-saving vaccines. While the death toll from COVID-19 staggers the mind and has touched many of us personally, we are also aware that we live in a time of miraculous medical and technological advances, a time of wonders indeed, such as the Bible describes in the story of the Exodus.

The arc of the Exodus story is completed at Sinai: We were liberated from being slaves to an authoritarian tyrant to becoming servants to the One of the Universe. The same word is used in both cases. Slaves to Pharoah and servants to God are both named by the same Hebrew word, ‘avadim,’ and the labor of each is called ‘avodah.’ At the time that the Temples stood, avodah also referred to the rites of the sacrificial service and after the destruction of the Second Temple, avodah designates the spiritual work we do through prayer. In Mussar literature, avodah came to signify the work we do on ourselves – first learning to recognize when our Yetzer turns toward the Ra and then to constrain it through Kibbush. Later, our avodah on ourselves comes to signify our desire to engage in Tikkun haNefesh, repair of our soul-root, such that we help to bring Tikkun ha-Olam, the rectification and redemption of the larger world. We at CCM emphasize the overarching command to love our neighbor as ourselves as the key to our expanding commitment to service and to the joy that such service brings.

At this season, CCM is offering all our students a chance to think about the Seder before we have to conduct it or be guests at it, so we can each bring the redemptive story of our personal Mussar work to whatever Seder we attend. We have all been slaves to something or someone, whether it is to egoistic Pharaohs of our own making or the larger societal Pharaohs to which we’ve given allegiance. Recognizing this, our Rabbinic Advisory Council has crafted a series of five programs, each one designed to help us think about the different spheres of life we inhabit– personal and professional, societal and spiritual––and how they can come into a new, sharper focus when we apply to them the central metaphors of the Passover story. We hope all of you will attend, as we have expanded our capacity to host up to 500 people on these Zoom calls!

Click here to see the Pre-Pesach Schedule and/or to register to attend–we hope to see you there! 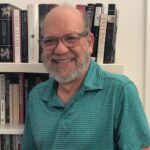 Herb Levine has been studying Mussar since 2011 and began teaching on-line classes in 2016. He has been teaching Jewish adults since the 1980’s, primarily through the National Havurah Committee Summer Institutes. His book on Tehillim is Sing Unto God a New Song: A Contemporary Reading of the Psalms (1995) and his book of psalm-like poems is Words for Blessing the World: Poems in Hebrew and English (2017).He is committed to providing resources for a spiritual path to believers and non-believers alike. He is the general editor of the CCM workbook, Cultivating Your Soul.