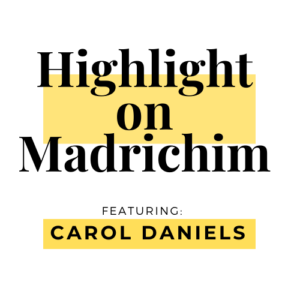 Carol Daniels grew up in Williamsburg, New York, surrounded by a large extended Orthodox and Hasidic family. Now over a decade into her Mussar studies, she continues to evolve and deepen her own expression of Judaism by integrating meditation and breath awareness into a daily Mussar practice for herself and her students.

Though Carol is quick to acknowledge the wealth of Jewish wisdom that she internalized from her kosher home, as a young person she felt “in some ways that this had been imposed upon me, as opposed to truly opening my heart.” Carol recalled the challenging and often opposing demands of her life in and outside her home. For example, at a senior prom she was one of only two people eating a kosher TV dinner.

“What Mussar helped me see,” Carol continued, “was that fear could be turned to awe of God. I was able to accept the notion that what I was afraid of was not punishment, but of my responsibility to see the other as my burden, infinitely extended. As soon as I began to think like that, I began to experience transformation in a way I never could have imagined. Mussar became my spiritual practice.”

“What my mother’s [Hasidic] side provided for me–which I hadn’t really discovered until this later part of life was my interest in meditation, breathwork, and ways to enhance a daily Mussar practice. As a child, I used to think my mother was not like other Moms. She seemed spacey to me. But really she was meditating!”

As a young artist in the 1970s–having survived the cheeseburger–Carol rejected the Judaism and created her own path.

She eventually met and married Ted Daniels who was a folklorist with interest in the millennial movements. Though he wasn’t Jewish, he was deeply interested in the intellectual exponents of Judaism: the values and rituals, the emphasis on life on earth as opposed to the afterlife, the here and now. At the prompting of the Rabbi who married them, they identified Judaism as the framework through which they would sculpt their family life. Together, they created a Jewish home life with their own rituals and richness.

“I took my first Mussar class with Miki Young z’l [in 2006] at Beth Am Israel synagogue. In 2008 I was diagnosed with breast cancer, the second cancer of my life. I was doing everything I could do to aid my recovery, but I felt something was lacking. I wanted to cleave closer to God. I didn’t really know what God meant to me. Miki told me I needed to study with Rabbi Ira Stone at BZBI.”

“I discovered that Annie was Rabbi Stone’s wife. One day, I was sitting next to her in the chiropractor’s office and I told her what Miki said–that I should talk to Rabbi Stone about being in his Mussar Leadership Program. She said, ‘You can talk to him right now because he’s on the other side of you!'”

Carol had her interview with Rabbi Stone on the spot, and shortly afterwards began her studies with The Mussar Leadership Program at BZBI in 2008.

In her early days of Mussar Carol described her background as traumatic, until her studies with Rabbi Ira Stone deepened: at a Kallah he invited her to sit down and said, “It’s time to change the story.”

That moment had “a tremendous impact on my beginning a tikkun journey,” Carol smiled. “Now, I look back on my upbringing only with gratitude.”

The entire CCM community feels the deep loss of Linda Kriger z”l, perhaps few as deeply as Carol. Carol and Linda were long term chevruta partners. What made their chevrutra relationship special was not only the deep text study they shared, not only how they reflected their Ner Tamid in each other, and not only the intimate stories they exchanged–it was even more.

Carol said they shared “an openness to be present to each other in perhaps some of the most absurd ways! Most people probably have a set time and a set place to study. Linda was a very busy person, so it was hard to have a set time and place. But, we were committed to this relationship and chevruta weekly study. Sometimes our time could be when Linda was making chicken soup for shabbat dinner or on a train to New York. One of the most unusual times of all times was when Linda was on her acupuncturist table. We still practiced chevruta. Being open to the commitment, knowing that the other was there for each other–hineni–whenever we needed it… We really wanted to grow together, and we witnessed transformation after transformation in each other. It translated into our teaching together–we just loved teaching together.”

Over the years, Carol has studied with some of CCM’s foundational madrichim, including Miki Young z”l, Mindy Shapiro, Beulah Trey, and Rabbi Stone. She reflected on the deep impact each of them have had on her life and how she teaches Mussar.

“One of the most beautiful gifts I received from Miki was to imagine upon waking each morning when I would put my feet on the floor that I was placing my feet on holy ground. Miki is with me every day as I place my feet on what I now believe is holy earth. Mindy Shapiro inspired and encouraged me to become a madrichah. Beulah Trey taught me that to be the best madrichah I could be would require me to really come to know my yetzer hara. I still study with Rabbi Stone whenever I can. I am a Rabbi Stone groupie. I am greatly thankful to all my teachers for their wisdom that I bring into every class I teach since I began teaching in 2014.”

“In the most recent class I have been taking on Nefesh haHayyim with Rabbi Stone, I have been thinking more and more about our breath. I am more and more cognizant of the idea that we do not even breath at all, but we are being breathed. This gift from our source of life is how we are connected closer to this source, ourselves and each other. Breath is the great connector.”

One of the unique elements Carol brings to her students is how to develop a breath meditation practice. She said, “The focus on breathwork is an important tool in our Mussar tool box that can be used to enhance daily practice. It is a way of cultivating an ability to live in the present moment. It is a way to understand core Mussar concepts, and to feel a sense of the eternal within us. This process helps one to gain more clarity so that middot can be applied to foster responsiveness rather than reactivity.”