Throughout her life, Karen Kripke has sought authentic and meaningful ways to express her Jewishness. Although she enjoyed attending Hebrew school and was active in her Reform synagogue in New York, traditional services and liturgy never inspired her.

As a college student, Karen began to entertain the idea of keeping kosher as a way to connect to  her heritage.  And although it took several years before she actually outfitted and kashered her kitchen, the thought of following the Jewish dietary laws resonated with Karen. “Keeping kosher represented to me a concrete, everyday way to be Jewish. I liked the idea of attaching myself to a Torah commandment so that everything I put in my mouth would be a daily affirmation of my Judaism. It felt real and it felt right.”

Forty years later, while Karen continues to nourish her body through the practice of kashrut, she has found in Mussar a powerful, everyday way to nourish her soul, as well.  In 2014, she began studying Mussar in a class led by Mindy Shapiro at Germantown Jewish Centre in Philadelphia. Within months, finding that the purpose of Rabbi Stone’s approach to Mussar was to bring the spiritual down to our world through practical application, Karen knew that she wanted to become a Madrichah upon completion of her four-year study.

“Although I’ve earned several degrees and enjoyed various career paths – as a teacher, lawyer, and grant writer – Mussar is by far the most valuable education that I’ve ever received. Ramchal states that while most people spend their lives in all kinds of academic pursuits, few take the time to learn how to be good human beings, largely because we take for granted that we know how to be good. Through CCM’s Mussar program, we acquire the tools required to develop our character traits and become better human beings.”

Karen was able to truly appreciate the transformational potential of Mussar when she first noticed that her typical reaction to a challenging situation was unexpectedly different.

“Before studying Mussar, whenever I felt that someone had slighted or insulted me, I would become defensive and react accordingly. However, several years into my study, I was faced with such a situation. Instead of focusing on my own feelings and reacting in my typical manner, I applied the middah of Metinut [deliberation], thought about the person who had offended me, and asked myself what burden he might have been carrying that caused him to approach me the way he did. As a result, I responded in a kind way that acknowledged his feelings, and in doing so, totally defused the situation.”

As a Madrichah, Karen’s foremost goal is to facilitate spiritual growth for her students, whom she also thinks of as her teachers. “A true Mussarnik is a person who ‘sees’ you. Mindy taught us that,” said Karen. Learning to truly see the other, recognize the other’s burden, and proceed in right relationship with the other is the cornerstone of Mussar. “What Rabbi Stone has given us is unique. It’s a holistic approach that utilizes a variety of tools, including Torah and text study, discussions both in class and with a Chevruta [study partner], journaling, and the daily practice of the Middot [character traits].

Karen’s approach to Mussar study revolves around the idea that, “We’re all put here to bring our own Torah into the world, and it will manifest in each of us differently. That’s the beauty of it. While a typical Mussar class includes people from different backgrounds, the va’ad creates for us an opportunity to share a path as we support each other in our respective journeys toward spiritual growth.” 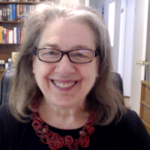 Karen Kripke has been with CCM since 2014 and became a certified madrichah in 2018. A lawyer and grant writer with conflict resolution training, Karen has taught on both the high school and college levels. For over 30 years, Karen has been teaching in Philadelphia-area religious schools, most recently at Har Zion Temple. She and her husband Ned are blessed with two sons, a daughter-in-law, and two grandchildren.