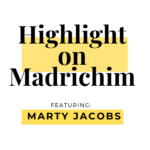 Marty Jacobs serves as Treasurer, Board Member, and Madrich with CCM. Though he grew up in a Conservative Jewish household, Marty’s family didn’t have a strong expression of Jewish practice at home. His return to Judaism and discovery of mussar were both unexpected.

He met, fell in love, and married Irene in 1965. She was not Jewish and their new secular life together was not much different for Marty. As always, he maintained a strong intellectual connection with Judaic texts, compiled his own Jewish library at home, and continued to study privately as his work and family grew. But one fateful afternoon, Irene’s growing interest in his books sparked a journey that led them both to discover a new home in Judaism.

“When Irene opened the doorway,” Marty felt like he found the “best of both worlds.” His intellectual connection with Judaic texts combined with the emotional connection with their newfound Jewish community at BethEl Synagogue in Waterbury, Connecticut created a warmth unlike anything he’d known.

“The spiritual [aspect of Jewish practice] came with mussar,” Marty recalled. “In 2010, our Rabbi [at Or Hadash Synagogue] was taking sabbatical and the congregation hired Rabbi Roni Handler as interim rabbi. She gave two lectures on Mussar.” After the second class ended Marty was eager to continue, and through the rabbis they found Mindy Shapiro. She became his first Madrichah and encouraged him to become a Madrich.

“Mindy used to say: try to understand where in your body you’re feeling that Ra,” Marty said, “I’m not so good at that. But I can try to identify the triggers that set off (my yetzer) and be more sensitive to drop it when a situation like that happens again.”

After graduating from the 4-year course with Mindy, he went to BZBI in Center City for a class with Rabbi Ira Stone and Dr. Beulah Trey. He continued with Mussar because of “the combination of the shiur and vaad; text study and interpersonal interactions. That is key to going from studying Torah, to acquiring Torah, to practicing Mussar. There is more than one pathway, but I find CCM is particularly effective.”

Marty continued, “One of the lessons we learn early on is that although study is important, it is about acquiring Torah, not just studying it; internalizing the lessons and practicing them. Without the va’ad it can become just text study–not that there’s anything wrong with that–it’s just that Mussar takes us to a place of practice, combined with journaling and chevruta. The chevruta idea is not original to Mussar. It’s a very traditional way that persists–especially among Orthodox practitioners–to this day. I’m sure my Grandfather who grew up in Hungary in the 1870s had a chevruta in his school. It’s a very traditional method and very effective.”

Marty invited Irene into the study of Mussar about five years ago, and they delight in the ways their practice has brought them closer.

“It’s funny,” Marty chuckled, “both spouses being students of mussar. Every once in a while we’d start to feel a little angry about something then quickly drop it, and we’d joke: is that your mussar or my mussar?”

All the relationships in Marty’s life blossomed throughout his mussar practice, especially that with Irene, their children, and his siblings – with one resounding exception. The relationship with his mother was unchanged in its perennial goodness, “we always had a great relationship.” He was also very close to his father who he tried to emulate, “One of the most gratifying things is the recognition that although some people never study mussar, they are probably more advanced than any of us–my father was one of those people.”

As Marty’s practice evolved, he also began to extend kindness toward strangers.

“What I feel really grateful for is my three grandchildren; they all clearly show the ability to feel and express kindness toward strangers. We all probably had something to do with that–I did, Irene did, my Mother did, her parents–it is a generational thing.”

Marty said he still tends “to rely more on intellect and emotion. But over the years I’ve become more balanced; especially with Irene. Still, I am a scientist by training. Most people think of scientists just as focussing on the intellect but it’s more–we have to have gut feelings and intuition. Albert Einstein’s intuition, for example, was better than everyone else’s intellect.”

“Could be,” Marty said, “the key to scientific thought is being open. If we get married to our hypothesis, we can’t see the evidence to the contrary. We have to be open to things that tear down our favorite hypotheses and either discard or modify them. Humility, the middah Anavah, treating everyone as a teacher can operate here.”

Before he became a Madrich in 2016, Marty had a variety of teaching experiences. He studied chemistry in college and completed his doctorate at Princeton. Though graduate school emphasized preparation for a career in academia, Marty went right into industry. With a young wife and new baby he didn’t have the luxury to spend in post-doctoral research–which he occasionally regretted. However, he was able to find ways to express his desire to teach through his career in industry and management, where he served as a mentor to many younger colleagues. He also served as an adjunct professor at two universities.

“After 33 years in the textiles and plastics industries, I spent twelve years as a consultant, ten years of which were spent directing government sponsored research with a group of eight universities. So I got to work one-on-one with faculty and graduate students and got to finish my career where I might have wanted to start it. It was kind of ironic–they hired me because of my industry background and so I really had three jobs. One was to interact with the US Congress on getting funding for these universities, another was to work with the students, and the third was to manage the projects so the government got their money’s worth. It was the most enjoyable job I ever had.”

Perhaps until now, where Marty serves CCM in multiple capacities and teaches a graduate level class in Tomer Devorah.

“While Mesillat Yesharim is the crucial and necessary foundation for the CCM curriculum, Tomer Devorah provides the basis for further Mussar study. Its thirteen middot in Chapter 1 form, in effect, a second foundation. The class I’m teaching builds on that foundation by introducing subsequent chapters of Tomer Devorah. We are about halfway through chapter 2 and plan to move on to chapter 3 later in the semester. New students are welcome and would be provided individual tutoring to get them caught up with the returning class members.”

Graduate students are welcome to register here for Tomer Devorah.